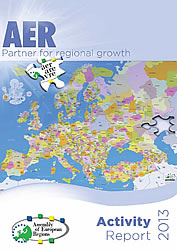 On 30 November 2011, in Ponta Delgada in the Azores, I was appointed Secretary General of the Assembly of European Regions. This was made effective at the beginning of January 2012 and represents a wonderful challenge: to bring together 253 European regions, as diverse and widespread as possible, from Norway to Georgia, from Portugal to Russia.

To transform AER as a partner of growth for the European regions was the essential objective during these 3 years: a new strategy was adopted, new communications tools were developed (logo, website, electronic newsletter), political reports were published and more than 100 annual events were organised thanks to a dynamic and multi-regional team based in Strasbourg, Alba (RO) and Brussels.

The opening of AER to the academic world and to the world of enterprises as well as the creation of a center of regional expertise were also elements which I was able to bring to the AER.

More than 60 missions in 3 years time in about 50 regions consolidated my opinion on the potentialities of each of the European regions. Those missions and regional contacts enhance my professional experience in regional expertise.

Diplomatic Representative of Brussels-Capital Region to the EU (2000-2011)

While teaching European institutions, German and Dutch at the EPHEC University College in Brussels Education Institute in Brussels (Marketing and Business School), I had also the opportunity to manage the first Erasmus and Tempus exchanges with other European universities.